Tired of the same old fidget toys? Well, today I've got for you seven unique fidget toys for your fidgeting pleasure. 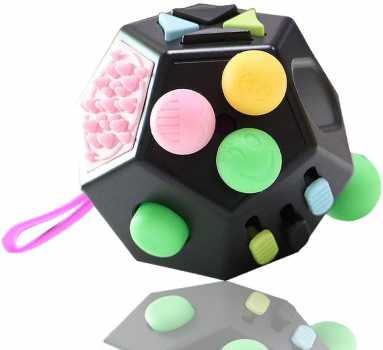 Now, you've all heard of the fidget cube - boring. How about a 12-sided fidget cube. That's right, 12 sides of fidgeting fun. It's got your standard fidget cube buttons and switches, but it also has these knobs which remind me of the game Wipe Out. Where people have to jump on the big balls. My favorite part about it is that it has a little finger strap so you can hold on to I and it just looks cooler because it has extra size. Exercise is always good like when you get French fries in an apple pie. 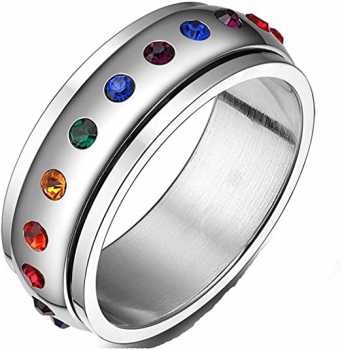 Next, we have the spinner ring. You can wear it and it looks cool and you can spin it with just your thumb. I like this one because its very adult cause people twist their rings anyways and I like it's got all these different colors on it. They also have ones that are Roman Numerals and some more manly looking ones if that's what you prefer. 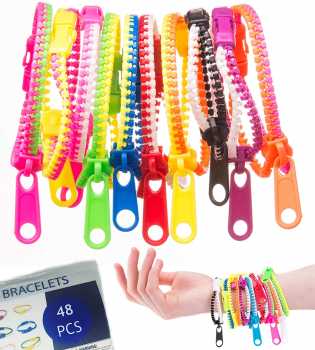 Next, we have the zipper bracelet. Now this might not look like much. It's just like a plastic bracelet but this thing is really cool and it's actually one of my favorite of all that we have today. It has a really smooth action and you just wear it on your wrist like a bracelet and you can zip-zip back and forth. It feels really good and I like this kind of fidget like so just zip and unzip because I will do this with my zipper all day. It's like a cool feeling when you pull it - so thumbs up. 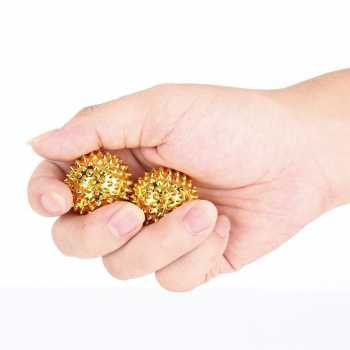 Next, Spiky Magnetic Balls - that's what they're called. They're just spiky enough that you get a real pokey feeling. I don't know what other words to use than pokey but it's really lit. I tried these. In my opinion this is too much for me. This is too much sensation through my body. Well, it is very spiky, it doesn't hurt but it is like a very prickly feeling, almost like you know, that one side of the cheese grater that you don't know what it does. You'll still rub it because it felt cool on my hand and it has a magnet on one end of each one so they're kind of magnetized together. We like the magnetic spiky balls. 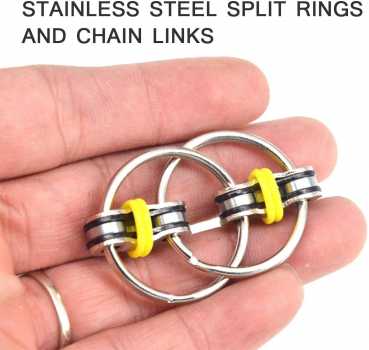 This one I'm gonna have to say I was a little disappointed in. I like the concept and it does do a neat twirly thing but it's kind of hard to use with one hand. You can't really pull out the action with one hand. You really have to concentrate and use two hands. I think if it was heavier and bigger, maybe a kid would like it better because their hands are smaller. I bet you could actually put your keys on this because it's actually a key ring and then you can play with it. Your kid will probably have more fun. 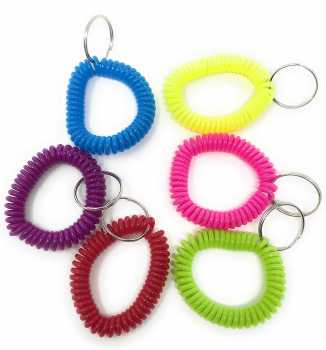 I love this. When I was a kid, I usually chewed on telephone cords which is kind of good. I kind of like the way it smelled and then like when you would bite it, it had this like how a double layer to it which was probably me almost getting electrocuted. They don't recommend chewing on this because it's not under the chewable category. I don't know what kind of plastic it's made of but, these are nice because you can manipulate them through any different way and you can get like a stretchy, pully feeling from it - like a resistance. You can use it in your hair. I like wrapping it around my fingers. It brings me back to the 80s and they have these metallic one which have a texture to them. That's two layers, that's textured, and this is the plain one. Those are cool especially for kids because I think you get like four of five in the pack. 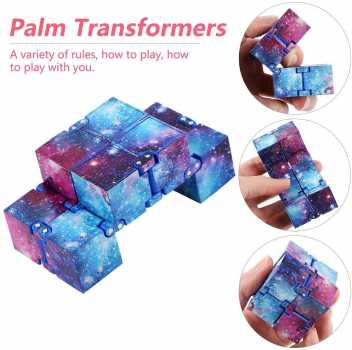 Last but not least, digit number seven - can you guess what it is? It's the Infinity Cube. Move over fidget cube, here comes the infinity cube. I love this thing. It got eight squares with hinges on them. Do you ever have one of those Jacob's Ladder toys as a kid? I never had and my friends had one and it keeps going no matter which ways you turn it; it's just keeps on changing into different things. It has a snappy sound when you flip it over with your hands. It's very satisfying and I like the haughtiness in your hand and has a nice weight to it - so the infinity cube is a winner.

Six out of seven of these toys, I really like and I think they're unique and they all offer a different sensory experience. I really like the magnetic spiky balls - they just have my heart.